So I’ve just spent 3 days in Hong Kong whilst en route to Sydney… and wow what a whirlwind of a few days.

Firstly I actually found it very very difficult to actually spend any of my money in Hong Kong. Even though I am a bit of a tight ass when it comes to travelling, I try not to take the piss and like to pay my own way, but this proved difficult. When in Hong Kong I was staying with some family friends of my girlfriends in Wan Chai on Hong Kong Island. And they were a very sweet couple and looked after us very well. Taking us out for numerous meals, this included 7 course lunches and 12 course dinners all in the same day, and then never letting us pay. But I guess this is all part and parcel of the culture in Hong Kong. And naturally I managed to make a fool of myself on one of these occasions, when at a Chinese Buffet I took what I though was just a bowl of noodles which I then mixed a few other pieces from the buffet in with, only to have a member of staff rush over to me and grab the food away from me because I was literally about to eat raw food of some sort. Apparently I was supposed to hand over what I wanted to the chef to cook….. it wasn’t embarrassing in the slightest…..

Throwback to the Past

Whilst in Hong kong me and my other half also managed to catch up with a couple of our own personal friends who we hadn’t seen in well… a very long time. I managed to meet up with a friend of mine called Danny who I went to school with and hadn’t seen in about 7 or 8 years?? A very long time anyway. And it was pretty cool to meet up after all this time, in hong Kong of all places, and have a beer and pizza and have a bit of a catch up. And following the way Hong Kong way, Danny paid of course!! Then later that evening (later being 1am) we arranged to also meet up with a friend of my girlfriends who she went to boarding school with back in the day, which turned out to be one hell of a crazy evening.

A standard night in Hong Kong

So we met up with my girlfriends mate Dennis and his girlfriend Yukimonkey on Lockhart Road, which is one of the more famous areas for going out in Hong Kong (lots of clubs, bars and well….. I think you can guess). And that isn’t a typo her name actually is Yukimonkey and in my typical ignorant British way it didn’t take me long to simply just refer to her as “Monkey” for the rest of the evening. The night started off pretty boring it has to be said, is how it is when you are listening to other peoples reminiscing, but as the evening and drinks (all paid for…again) went on me and monkey gradually became more involved, and it turned into quite an epic night. After being kicked out of the bar we were in on Lockhart Road (around 3am) we were taken to some street (I have no idea where exactly) in central. And I’ve had a few people try to tell me that Hong Kong is boring, well this place was not boring. It literally was just a street party. Everyone was just spilling in and out of the bars and clubs onto the street, drinking and raving, and there were even 7/11’s on the street where people were buying more alcohol and just drinking it out on the street. Absolute carnage. People were throwing up everywhere, one lad I even put into a recovery position because he was flat out on his back – my thanks for this was to get started on naturally…. Then there was a street seller who was selling little dancing dudes and headbanging Snoop Dolls which frankly were absolutely hilarious. Just crazy absolutely crazy place. So after going in and out of the bars ourselves, buying drinks, dancing in the street, saving lives, buying more drinks the night finally became day and with the bars closing we went for one more beer from the 7/11 where I saw a guy pocket a Strawberry milkshake, of all things, to only then go up to the till and buy 5 beers. It had to be on the stranger crimes I have ever witnessed in all honesty…. We then finally said our goodbyes and promised to keep in touch… I think we have arranged for Monkey to come over and make us a gigantic Pikachu cake (Monkey is a cake maker by trade) for our wedding (if we get that far), and then finally got back to the place we were staying at around 8am. I think our hosts were pretty bewildered to say the least and were probably genuinely quite concerned about our safety at that point! 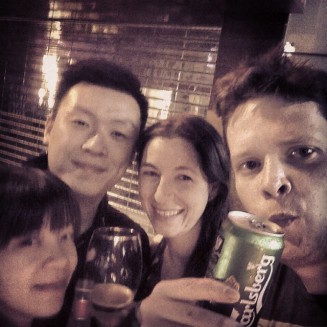 So as I’ve mentioned throughout we found it quite difficult to spend any of our money whilst in Hong Kong. So we needed to find somewhere that we could, and where better than the Ladies Market in Mong Kok. This place again… was pretty crazy and is well worth the visit just for the experience. I managed to pick up a few nice little traditional looking souvenirs like chopsticks and wall hangings that you could roll up, for quite a good price. And they were also small as well because I already had very little room in my luggage having practically packed my entire life into three bags. But be warned in order to get a good deal you will have to negotiate or else they will rip you off. As a general rule of thumb the actual value is around half of what they originally quote you (yes I said half). So you have to bel retry tough with them, because some will literally take the piss. For example, I saw a couple who were about to agree to buying to wall hangings (like the ones I had bought) at 2 for $250 HK, and I had previously managed to buy them at $50 HK each. So naturally I went up and told them not to be silly and that if you went elsewhere you could get them significantly cheaper, and even showed them which stall, because I’m nice like that and don’t want to see fellow travellers get ripped off. But understandably I guess, the seller didn’t share this viewpoint and subsequently followed me down the street, slapped me on the back, and wagged her finger in my face calling me “crazy”. If you encounter anyone like this my recommendation is to call them a “Chow Hei” :p

What not to miss

On our last evening we went up Victoria Peak which was absolutely stunning. It is pretty easy to get up to, you can either take a bus or taxi. And just to comment here a bit on travelling within Hong Kong – it is all pretty straight forward and they have cards (a lot like Oyster Cards in London) called Octopus Cards. I guess you can tell the similarity from the similarity in name, and like an Oyster card they work on all buses, trams and the MTR (underground), however unlike Oyster Cards they can also be used in a number of shops and can be topped up in any 7/11 not just at a transport hub. So they are a pretty handy thing to get. But back to Victoria Peak… absolutely stunning and something that you can not miss. I recommend going up at night so you can see all the lights from the buildings in the city – a lot of the buildings have changing colours or info graphics on the sides of building (all really cool stuff). When you go up there is a walk which circles the peak and has numerous viewing points where you can get that all important selfie!!!

View all posts by benprosser88