Before going to Rio de Janeiro the biggest thing I wanted to do, probably even more so then watching a World Cup Match, was to do a Hang Glide. It isn’t something I would normally go for but I do like to set myself a challenge when I travel to do the biggest adrenaline rush type thing on offer. And as far as Hang Gliding goes Rio de Janeiro is the place to do it!

I did my Hang Glide with Rio Hang Gliding which is run by Konrad Heilmann who is a former Brazilian champion. It cost 620 Reas per person which is roughly £150. This includes the full video package as well as a free t shirt and transport to and from your hostel. Overall I would say that’s a pretty fair deal.

On the actual day we were part of a group of about 5 people doing it. There was me and my girlfriend, two Australian guys, and then celebrity alert! We also had Justin Jedlica, aka the human Ken doll in our group. I honestly didn’t have a clue who he was but apparently he is quite famous. The story goes that he gets a bunch of plastic surgery in order to look like Ken and has been on shows like Oprah and some of the breakfast shows in the UK. But he was actually a really cool guy, seemed pretty down to earth and said that he actually just gets the plastic surgery he wants and designs a lot of what he gets done himself, apparently the Ken Doll thing was created by the media and naturally he just went with it. It gets him the money to keep doing what he does so can’t blame him really! 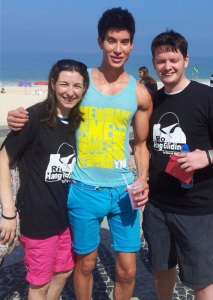 So when we got up to the mountain it took a long time for me to get paired. Because of my size and weight no one really wanted to take me!! And when Manny Navarro finally agreed to it, I had a long talking to about making sure that I would run, and that I didn’t stop. Because effectively what you do is run off a cliff attached to a huge kite, and apparently if you don’t run fast enough or stop mid run you can fall of sed cliff and die. So naturally I just made sure that I stayed cool and just ran like hell!!

So once I managed to safely navigate not falling off the cliff and dying the glide was absolutely amazing. The views were absolutely spectacular and it’s hard to put it into words. You glide over the Tijuca rainforest, get amazing views of the Favelas and then actually go out to sea a little bit before gliding back to land and landing on Ipanema beach. My girlfriend went straight after me with Klaus Koch and I could see her coming down afterwards behind me. Manny was a really nice guy and I think he felt bad for assuming that I was going to be a death risk. Overall it lasts around 10 minutes or so depending on how much altitude you get off takeoff and your weigh. It was definitely worth the money and it’s something I would love to do again!! The only thing to look out for is that there are some flies up there… not mosquitoes.. which don’t half take some chunks out of you. You can see the video of my Glide below!!

View all posts by benprosser88

One thought on “Rio Hang Gliding”